IAMAW District Lodge 70
iMail, News
Nearly 50 delegates to the Washington Machinists Council hit the state capitol in Olympia last week to be the voice of working families across the state.

Prior to their lobbying efforts, Washington Lt. Gov. Cyrus Habib and State Sen. Karen Keiser addressed the delegates during the Legislation and Education Session. The labor-friendly politicians shared what legislative issues were coming up in the state and how they can help fight for working families in their state. 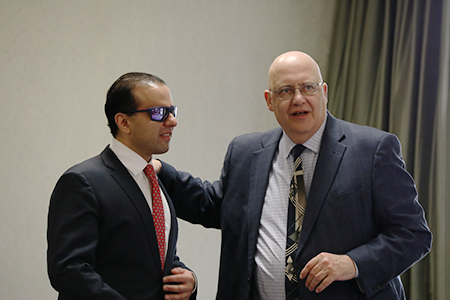 “The delegates to the Washington Machinists Council really make a difference here in our state,” said District 160 Directing Business Representative and Washington Machinists Council President Dan Morgan. “They stay educated on the issues and legislation that affect working families and march right to the Capitol to hold their politicians accountable.”

“I’m very proud of the work of the Washington Machinists Council delegates and their leadership,” said Western Territory General Vice President Gary Allen. “These Sisters and Brothers stay on top of legislative issues that not only affect union members, but all working families and their communities. I also want to congratulate Council President Dan Morgan on his upcoming retirement. Brother Morgan has served our membership well and I wish him nothing but health and happiness in his future endeavors.”