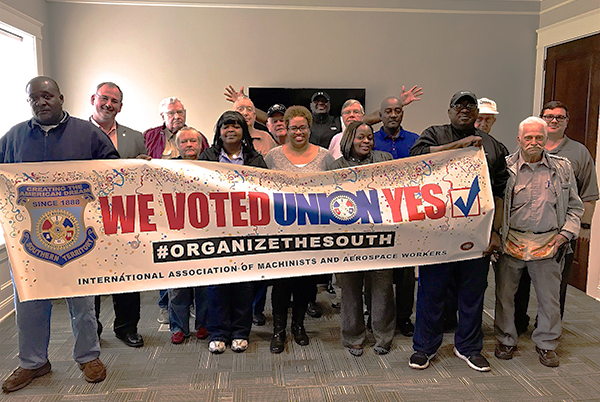 “Whether it’s a unit of 10 or 10,000, or the workers are 18 or 80 years old, every working American deserves a fair Union Contract,” said Southern Territory General Vice President Mark Blondin. “And for our Brothers and Sisters at Avis in Augusta, GA, we are proud to give them something they didn’t have before – a voice on the job and dignity at the workplace. And a contract that shows them it pays to be a Machinist.”

Much like the IAM’s storied history, Avis Rent a Car has ‘seniority’ in its field. Founded in 1946 by Warren Avis, it was the first rental car operation located at an airport. Today, the company’s facilities can be found in cities and airfields around the globe. But it was at the Augusta Regional Airport in Georgia that the Machinists met a group of workers who already held seniority, just not on the job.

“This unit is comprised in large part of senior citizens working part time. One of these senior citizens is Ron, an 85-year-old former police chief from Pittsburgh,” explains IAM’s District 131 Directing Business Representative Billy Barnwell. “During the campaign, I asked him if the company’s anti-union tactics were influencing him. He responded by saying, ‘I’m 85 years old. I might not wake up tomorrow. Nothing that company says is going to scare me.’”

From that moment on, Barnwell knew he was going to get these folks a great, first contract. They cared more about the whole than the individual parts, making them a perfect fit for the IAM. Plus, on his side, Barnwell had an army of experience within this group to help him get it done.

“I am very proud of this group. While the committee members were both full time employees, they insisted that we continue negotiating until we won Holliday pay for part time employees, which we did,” said Barnwell.

So today, 29 rental sales agents, drivers and services agents will begin enjoying their IAM Contract. An agreement that offers a grievance procedure, 3.5% raises, stops temporary workers from displacing bargaining unit members, paid vacations and holidays for full time employees and, of course, guarantees the ‘Union’ definition of seniority rights. While this may not be your typical Machinist group, their reasons for wanting to be an IAM member is right on target.

“My job is to help people live better lives. Sometimes that mandate overrides the math. When these folks approached District 131 they needed help, and we gave it to them with a Union contract,” said Barnwell.

“Because that’s what we do in the South. We make sure to take care of the working men and women whose grit and determination have built this country. Seniority means a lot at a bargaining table, but it means even more to those who give their life to the job and taking care of their families. Those are the people I want holding an IAM Card,” said Blondin.