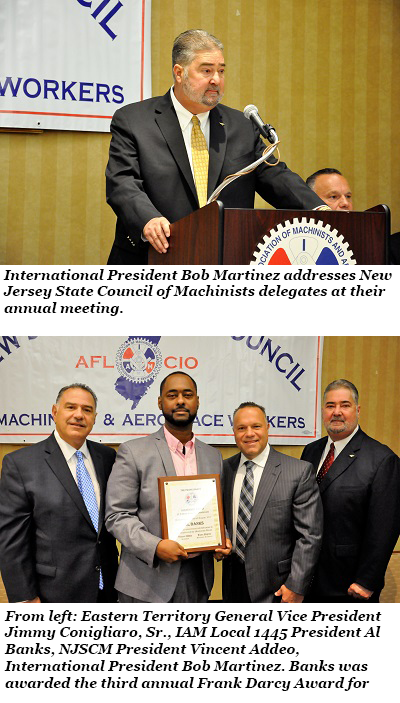 IAM International President Bob Martinez addressed the delegates about the importance of growing the IAM, supporting candidates who support workers and living up to our name, “The Fighting Machinists.”

“The focus of the IAM is to grow and bring new members into the Machinist family,” said Martinez. “There are too many working people who don’t have a union and the respect and dignity that goes with union membership and a solid collective bargaining contract.”

Eastern Territory General Vice President Jimmy Conigliaro Sr., updated delegates on current news within the territory, including the recent victories for the Maine Lobstermen and the Independent Drivers Guild for Uber drivers. Conigliaro urged delegates to continue to think out of box to grow the union, especially with “independent workers.”

“I challenge each and every one of us to leave here today and bring five new members into our organization before we come back next year,” said Conigliaro. “Just think about the impact that will have on the IAM, the middle class and the new members and their families.”

New Jersey gubernatorial candidate Phil Murphy dropped in for an intimate visit with the delegates and officers after the conference. Murphy was U.S. Ambassador to Germany under President Barack Obama for four years.

“The New Jersey governor’s race is the single most important issue facing the New Jersey State Council this year,” said Council President Vincent Addeo. “To say the working families of New Jersey have suffered at the hands of Chris Christie is an understatement, and labor has a champion in Phil Murphy.”

During the conference, IAM Local 1445 President Al Banks was awarded the third annual Frank Darcy Award for Leadership. Darcy was a longtime activist, and a skilled machinist. He continually furthered his education in labor and other fields and was active in politics, all with the goal of improving the lives of fellow working men and women.

The post New Jersey Machinists Looking Towards the Future appeared first on IAMAW.