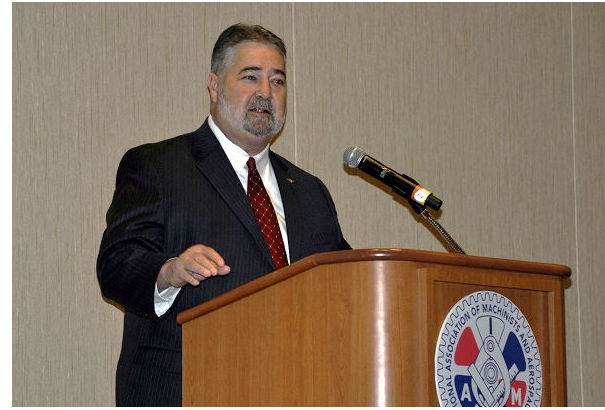 International President Bob Martinez addresses the Eastern Territory Staff Conference on the importance of growing our ranks and using collective political action at the state level to stop the attacks on workers.

The 2017 Eastern Territory Staff and Organizing Conference wrapped up last week with a call: recommit to strengthening the working class and the IAM.

“No country on the planet has ever created a strong middle or working class without strong unions,” said Eastern Territory General Vice President Jimmy Conigliaro, Sr. “I truly believe if we want this country to have a strong, viable working class again, we need to increase our union density. This means doubling down on important issues: external organizing, internal organizing, and education.”

During the conference, staff from across the territory saw presentations covering all three issues, and more. Included was Director of the Winpisinger Education and Technology Center Chris Wagoner giving a presentation titled Background and Status  IAM’s New External Organizing Program.

Unique to this conference were the daily “open sessions” concluding each day with an open dialogue to dig-in, and have open, frank discussions regarding what the territory can do better going forward to grow the union and its legislative influence.

“Although we will work with the president when it is in the best interests of our members, rest assured, we will never, ever compromise on our principles,” said International President Bob Martinez. “We also are going to increase our influence at the state level. Our members are getting crushed by these state lawmakers and we’re not going to sit back and let that happen. ”

Every District was challenged to not only organize 250 new members, but to sign all those new members to a sponsoring MNPL membership.