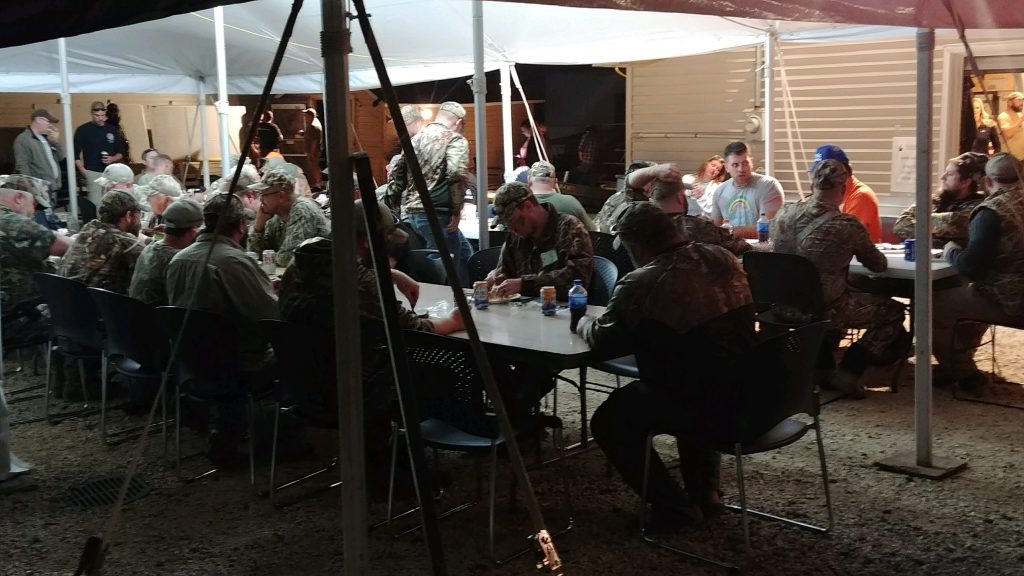 Nearly 80 veterans from across the U.S. and Canada traveled to IAM Local 873 in Horicon, Wisconsin this past weekend to take part in the 2017 Horicon Marsh Veterans Hunt.

Nearly 80 veterans from across the U.S. and Canada traveled to Wisconsin IAM Local 873 this past weekend to take part in the 2017 Horicon Marsh Veterans Hunt. As is the tradition each year, Local 873, also known as the Wildlife Lodge, opened its doors to serve as “barracks” for the veterans to sleep and keep their equipment.

“This year we set up over 60 cots,” said IAM Local 873 Shop Committee Chairman Nick Bednarek. “The veterans were provided free breakfast, lunch and supper for the entire weekend.”

Click here for photos from the 2017 Horicon Marsh Veterans Hunt

The hunt – which is provided free of charge to the veterans – is funded primarily by donations from generous donors, including IAM International President Bob Martinez, a veteran himself, who donated upon learning about the hunt during a visit with IAM Local 873 members at the Horicon, WI John Deere plant last July. Wisconsin IAM District 10 also contributed to the worthy cause.

“I would like to start out by thanking International President Robert Martinez for securing a donation of $2k for this cause and Alex Hoekstra and District 10 for its generous donation of $500,” said Bednarek.

“It was real warm today, so the hunting wasn’t that good, but that’s not why most people come here,” said Retired Navy veteran Russ Bachman of Oconomowoc, WI, to Wisconsin’s Daily Citizen newspaper. “If you get any ducks, that’s great, but most people, including myself, come for the camaraderie.” Bachman has taken part in the hunt every year since 2011.

New this year, the hunt allowed for handicapped veterans to get out on the marsh – many for the first time in a long time. The hunt included a large 24-foot boat with a handicap accessible crane, donated by Hero Hunts in Louisiana.

“I had quit duck hunting about five years ago because it was too hard. I couldn’t get around in the mud anymore,” said retired Marine Corps veteran Bob Chriske of City Point, WI, also to the Daily Citizen. “When I was invited here, they said I don’t have to get out of the boat. The technology they have with these boats now, you can run them right up onto the weeds and they’re perfectly stationary and that makes a big difference for me. We only got one shoveler (duck) this morning, but I enjoyed the marsh so much and it was a beautiful sunrise. If I am able next year, I will be here.”

The day ended with an incredible dinner of deep fried duck, goose and pheasant made from donated meat. Texas Road House came out with their outside grill and cooked the veterans ribs and chicken.

Click here for photos from the 2017 Horicon Marsh Veterans Hunt