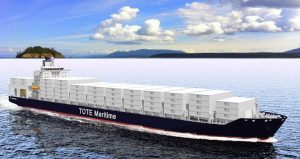 Recently, the Jones Act has come under heavy scrutiny from those in the press and across the political spectrum. TCU believes that the Jones Act is good for the United States because it strengthens and supports both our national economy and our national defense.

In short, the Jones Act is a law that says if you want to ship goods between two U.S. ports it must be on a vessel that is American-built, owned and crewed. This important policy helps keep the American shipping and shipbuilding industries strong and stable, even while under intense competition from foreign shippers with foreign-built vessels and low-wage crews.

It’s important to note that the Jones Act does not prevent foreign ships from importing goods to U.S. ports; again, it only applies to goods originating from one U.S. port and destined for another U.S. port. On the flip side, eliminating the Jones Act – as some in Congress have called for – would destroy thousands of good-paying American jobs, and is the equivalent of sending those good jobs overseas. Indeed, many of the jobs lost would be our Machinists brothers and sisters working in the shipbuilding industry.

Puerto Rico and the Jones Act

Much of the current debate over the Jones Act has derived from the false narrative that it is somehow keeping Puerto Rico from receiving relief aid. To be clear: this is factually false. Supplies have been getting delivered to the island ever since Hurricane Maria first struck. Crowley Maritime – a U.S. shipping company that employs thousands of union members in the maritime trades – released a statement yesterday that they have been delivering emergency supplies around the clock, and will have delivered 6,500 loads to the island by the end of this week.

[CLICK HERE to donate to the IAM Disaster Relief Fund or APPLY for assistance.]

The real problem in Puerto Rico is not getting supplies to the island, but getting them distributed from the main port in San Juan. Truck drivers throughout the island have been unable to drive either due to their inability to find a truck and/or because the road network is in shambles. Supplies that have been piling up in San Juan’s port are being distributed, but slowly and inconsistently. For their part, Crowley Maritime has stated they have 375 trucks on the island running logistical distribution, but – again – the transportation infrastructure is in complete disarray.

Per the USA Today:

…The barriers range from a lack of communication to blocked roads to a shortage of vehicles and drivers to make deliveries. As a result, one Port of San Juan terminal is storing 3,400 containers — more than double the usual number…Because of tangled power lines across roads, washed out bridges and highways and knocked out cellphone towers and radio antennas across the island, materials are leaving the Crowley terminal gate at 70% the normal rate…

Eliminating or waiving the Jones Act would do little to help Puerto Rico receive additional supplies. As the Government Accountability Office (GAO) found in 2011, the island already receives the two-thirds of its total supplies from foreign-flagged vessels, as well as 100% of its fuel. This alone disproves the narrative that the island is somehow being blocked from receiving foreign imports.

So why is it a topic of debate now?

As usual, opportunists use every excuse to push their agenda – including natural disasters. In this particular case, the Jones Act is being falsely portrayed by pro-free trade, pro-corporate ideologues as a cause of Puerto Rico’s misery and/or government “red tape” run amuck. Their obvious goal is to eliminate the Jones Act so they can undercut American shippers, shipbuilders, and maritime tradesmen with low-cost foreign replacements – and they’re using a natural disaster to do it.

At TCU, we fight to protect working Americans from corporate greed – wherever it is. And we support our brothers and sisters by supporting the Jones Act. Our elected leaders should focus on the real impediments to hurricane relief efforts, not the false narratives pushed by corporate special interests.

The post Why TCU Supports the Jones Act appeared first on IAMAW.