The Texas Alliance for Retired Americans (TARA) has been leading national Alliance efforts to pitch in on Gulf Coast disaster relief. The Alliance encourages that donations go to the Texas Worker Relief Fund
, and several members have already sent $100 contributions. 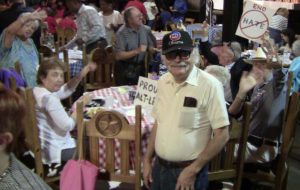 “Reports from Beaumont, Corpus Christi, and Houston indicate that our activists are staying dry and throwing themselves into helping everybody else,” said Texas Alliance President Gene Lantz in an e-mail.

Reverend Harmon Dent was asked if he wanted to get away from the floods in Beaumont by visiting Dallas. He replied “I’m needed here!” His home and church were spared from flooding.

He has been helping out there also, using a church van to transport people.

“Several churches flooded and the pastors and some members will worship with us,” Rev. Dent added. “Thank you very much for the offer, but, I’m needed here.”

He asked for prayers for the entire region.

Other union brothers and sisters have shown special concern for the retirees. Many Houstonians have lost their vehicles.

“What those affected need most is cash,” emphasized Robert Roach, Jr., President of the national Alliance.

The Texas Workers Relief Fund, a 501(c)(3) charitable fund overseen by the Texas AFL-CIO, has been established to assist workers and their families in their time of need. Funds are provided to help stabilize situations when issues occur such as natural disasters.