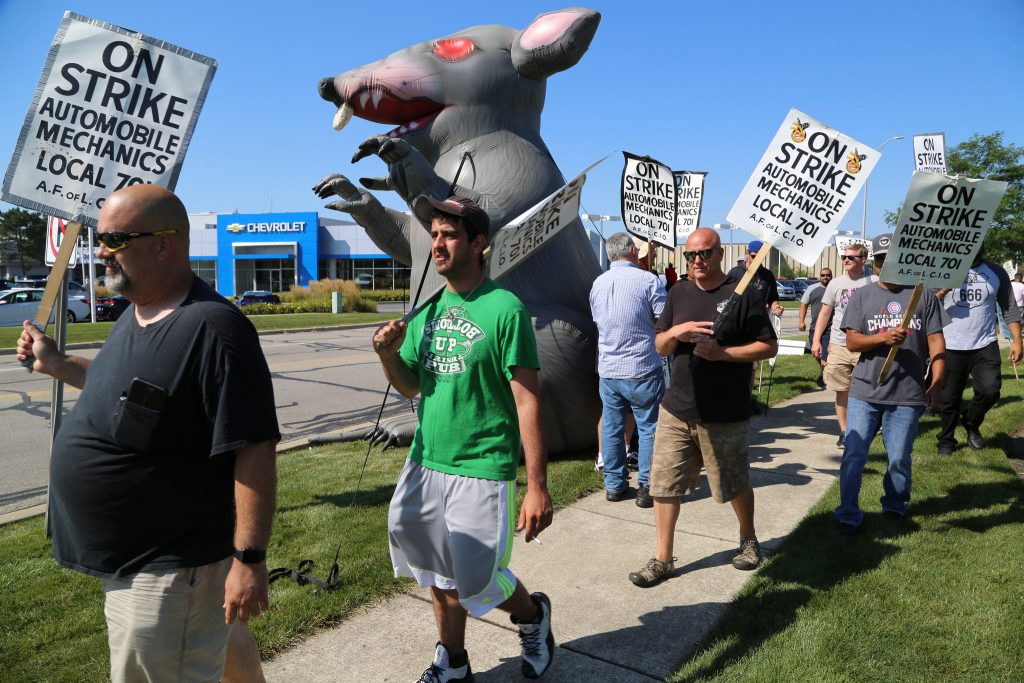 Carol Stream, IL, September 15, 2017 – After nearly seven weeks of picketing on the streets, approximately 2,000 striking Chicago-area auto mechanics will vote on a contract offer the union says it can “finally recommend” to its membership.

This is the fourth offer since the mechanics traded in their tools for strike signs in early August. The terms of the tentative agreement mirror the same offer proposed by the union and agreed upon by more than 70 individual dealerships who, since the start of the strike, have since broken ranks with the dealer association and have entered into an interim agreement with the IAM.

Main sticking points since the start of the strike have been uncompensated work time, advancement for semi-skilled workers, a shorter apprentice schedule, a more family-friendly work schedule for senior-level Journeymen technicians, and health care costs.

IAM Local 701 says the new tentative agreement fairly addresses each of those issues.

“We’ve said since the beginning that this was about improving the industry and bringing equity and fairness to what can be a promising long-term career for those dedicated to working in the automotive industry,” said Local 701 Directing Business Representative Sam Cicinelli, who knows first-hand the needs of the industry, as IAM Local 701 is home to one of the most effective automotive training centers and apprenticeship programs in the city. “After more than three months of negotiations and almost seven weeks of continued discussions with a Federal Mediator, the Local 701 Bargaining Committee finally has an agreement we believe is a step in that direction. We made significant gains in almost every proposal our members brought forth. This is an agreement we can certainly be proud of.”

Local 701 auto mechanics are expected to vote on the tentative agreement on Sunday, September 17, 2017 at 8am. Results will be released following the vote count.

Local 701 of the International Association of Machinists and Aerospace Workers (IAM) is the largest mechanics union in the United States, representing more than 6,000 highly-skilled craftsmen in the automotive industry. For more information, visit their website at www.mech701.org.

The post Union: Striking Chicago Auto Mechanics to Vote on Contract ‘We Can Finally Recommend’ appeared first on IAMAW.