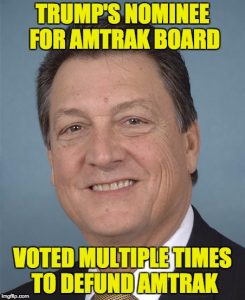 President Trump has nominated former Congressman Lynn Westmoreland (R-GA) to serve a five-year term on Amtrak’s Board of Directors. This is very concerning to anyone that supports, rides, or works on Amtrak as Mr. Westmoreland has a long history of voting against the nation’s passenger rail carrier:

These are just the Amtrak votes from his last term in Congress. We haven’t mentioned his staunch anti-labor record or any of his other anti-Amtrak votes throughout his 12-years in Congress.

Politics matters. How you vote matters. President Trump just nominated a fox to oversee the henhouse, and the jobs of thousands of TCU members are on the line.

The post Trump Nominates Former Rep. with Anti-Amtrak Record for Amtrak Board appeared first on IAMAW.