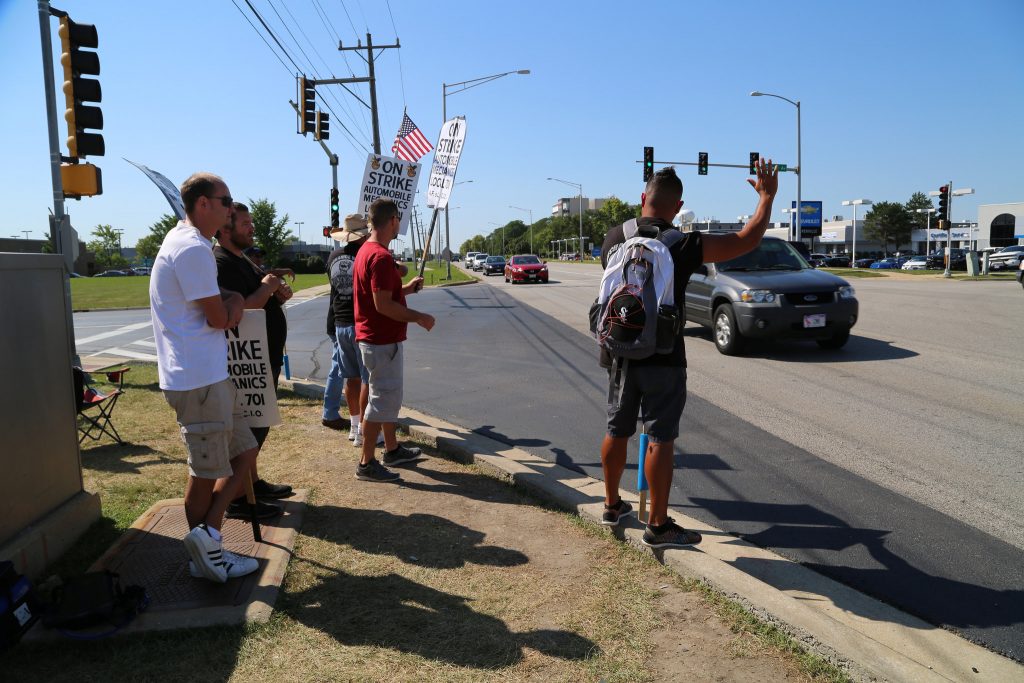 Members of IAM Automobile Mechanics Local 701 strike at more than a hundred new car dealerships across the Chicagoland area.

IAM Automobile Mechanics Local 701 has filed NLRB charges against the Chicago New Car Dealer Committee (NCDC) for bargaining in bad faith, after the NCDC attempted to circumvent the union by providing members an offer before the union had a chance to review it.

Members of IAM Automobile Mechanics Local 701, on strike at more than a hundred new car dealerships across the Chicagoland area, are taking time to review the NCDC’s third last, best and final offer, despite an artificial deadline imposed by the NCDC to force an immediate vote.

“Considering this ‘proposal’ was dropped on us at a time when the NCDC knew that the union was in a business agents meeting, and shortly thereafter in a membership meeting, we didn’t have a meaningful opportunity to work through the proposal,” wrote IAM Local 701 Directing Business Representative Sam Cicinelli in an email update to Local 701 members Thursday. “There are still several questions regarding the specifics of the offer. In order to clarify the issues and not have to have anyone adversely affected due to the uncertainty, I want to meet with the NCDC at FMCS prior to a vote to ensure clarity on what we are actually voting on. After we have received definitive answers on these issues, we can then schedule a vote on the proposal.”

The IAM and NCDC bargaining committees met several times last week in further attempts to reach a resolution on the contract and end the strike. The parties discussed the open issues which include significant unpaid work time – some technicians only receive 34 hours of pay per week even though some work as much as 45 hours a week.

“The union made a very reasonable, modified proposal,” said Cicinelli. “Our members have made it clear that the dealers must work with them towards fixing the problem of being forced to work for free. It’s disheartening that the NCDC is steadfast in its opposition to treating its employees fairly, especially when it comes to compensating an employee for his/her time at work.”

Other open issues include allowing a small percentage of most-senior technicians to have two consecutive days off in their workweek and the company’s proposal to increase employee health and welfare contributions by 100 percent.

“These dealers clearly recognize the reasonableness and fairness of the union’s current offer,” said Cicinelli.

In an attempt to dissuade other dealers from doing what is in their own right, the NCDC has filed NLRB charges alleging the union engaged in “illegal” deals with certain dealers.

“The IAM has not and is not soliciting the dealers to leave the association,” said Cicinelli. “The union will vigorously defend against these charges and believes it is operating within the bounds of the applicable labor laws.”

“I want to commend the members of IAM Local 701, Directing Business Representative Sam Cicinelli, and his entire staff on the strength, resolve, and solidarity shown since the members’ first vote to go out on the picket lines on August 1st,” said IAM Midwest Territory General Vice President Philip J. Gruber. “People across the entire U.S. have been watching this strike very closely. It has brought to light many of the issues workers in the automotive industry face – most notably mechanics having to work for free. It’s been an ongoing problem for many years – put on the back burner to help the car industry get through hard economic times. But profits are back up and our membership has decided enough is enough. The time to address the issue is now. They have the support of this entire union as they review and prepare to vote on the NCDC’s most recent offer.”