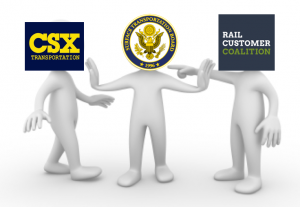 On Monday, a letter from the Rail Customer Coalition – a large group of shippers and various trade groups – was sent to the leaders of the Senate Commerce and House Transportation & Infrastructure committees regarding the poor service provided by CSX in recent months. Notably, these last few months have been the first for CSX’s new CEO Hunter Harrison, a controversial figure in the railroad industry.

Excerpt from the Rail Customer Coalition’s letter to House and Senate Committee leadership::

…As has been widely reported, there are chronic service failures occurring across the CSX network …Rail customers have had to take extraordinary steps at great cost to meet the needs of their customers because CSX has repeatedly failed to pick up and deliver cars. This has put rail dependent business operations throughout the U.S. at risk of shutting down, caused severe bottlenecks in the delivery of key goods and services, and has put the health of our nation’s economy in jeopardy…

Clearly these shippers are not happy about service thus far under Harrison’s tenure. The letter essentially asks Congress to pressure the Surface Transportation Board (STB) – which has jurisdiction over rail industry service issues – to launch a formal investigation. The Rail Customer Coalition also asked the committees to “examine the ramifications of the CSX service breakdown, and whether there are adequate means available to the STB to mitigate the adverse impacts to the rail network.”

STB turns up the heat

It appears the STB was expecting this pressure to heat up, because they sent their own letter to CSX CEO Hunter Harrison that same day. The STB’s letter asks that CSX conduct a weekly call with the STB and to provide certain performance information ahead of time so that they can discuss any ongoing service issues. The board will publish this information on its website.

It’s worth noting that a lot of these service issues weren’t unexpected as Hunter Harrison continues to roll out his infamous “precision railroading” scheme throughout the company. His business model has been heralded by Wall Street and investors for delivering huge returns. However, those views aren’t shared inside the industry, as Harrison’s schemes often include huge layoffs (which we’ve already seen at CSX) and aggravating shippers, of which this serves as a perfect example.

The STB has requested information on the following indicators:

Click HERE to read the letter from the Rail Customer Coalition (shippers).

Click here to read the STB letter to Hunter Harrison.