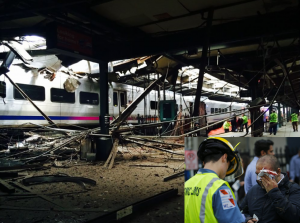 Aftermath of the New Jersey Transit crash in Hoboken, NJ, on September 29th, 2016.

The NTSB’s special investigative report details its findings on two accidents: New Jersey Transit’s accident in Hoboken, NJ, in September, 2016, and the Long Island Railroad accident in Brooklyn, NY, in January, 2017. Both accidents were found to have been caused by untreated obstructive sleep apnea – something the NTSB has repeatedly called for the FRA to act upon.

…The failure of the [FRA] to adequately address the issue of employee fatigue due to obstructive sleep apnea and other sleep disorders, most recently evidenced by the August 2017 withdrawal of the advance notice of proposed rulemaking, jeopardizes public safety…

In short, the NTSB is very angry at President Trump’s FRA for withdrawing its sleep apnea regulatory rulemaking.

Some Senators also joined the chorus of those faulting both the FRA and carriers. New Jersey Senator Bob Menendez reiterated the need to address operator fatigue while adding that New Jersey Transit “has become the posterchild for what can go wrong when you bleed a transit agency dry of critical resources and fail to prioritize infrastructure investment.”

The NTSB’s report also faults the FRA for failing to produce rules on fatigue despite being mandated to do so by Congress back in 2008.

“All these accidents had a common safety problem — inadequate screening, diagnosis or treatment of obstructive sleep apnea in safety-sensitive workers that led to worker impairment and derailment or collision involving tens of millions of dollars in damage, significant injuries and loss of life,” said NTSB medical officer Nicholas Webster, according to Politico.

This is troubling – but unsurprising – for unions representing rail workers who have been calling for the federal government and rail carriers to take a holistic, worker-supportive approach to addressing fatigue issues. Hopefully the NTSB report is a wake up to those in power that not all regulations are bad, and that most rail safety regulations are indeed written in blood.