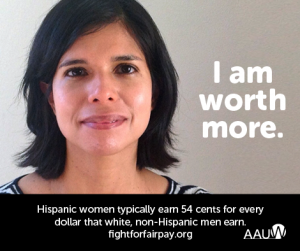 Although Latina’s make substantial contributions to the U.S. economy, they have the largest wage gap. Typically they earn 54 cents for every $1 earned by White, non-Hispanic men.

Latinas must work more than 22 months to earn what White men earn in 12 months. This disparity in pay hurts not only Latinas, but also has a significant impact on the families and communities they support.

November 2 is Latina Equal Pay Day 2017, which marks the day in the calendar year that Latina’s have earned as much as white men did in the previous year. Over the course of a 40 year career, Latina’s will be denied an average of a million dollars in earnings because of the gender wage gap.