Missouri Alliance members and other activists forced the suspension
Friday of a new anti-worker state law before it goes into effect, delivering dozens of boxes of signed petitions demanding it be put to a public vote in 2018.

Thirty-seven Missouri Alliance members traveled more than two hours by bus on Friday to march in Jefferson City and deliver petitions for the historic event. Others drove themselves. In all, more than 1,000 retirees, part of the “We Are Missouri” Repeal Right to Work coalition who are hoping to block the law, rallied at the state Capitol and marched to the Secretary of State’s office to hand in signatures. 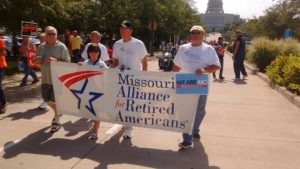 Republican governor Eric Greitens signed the Missouri anti-worker right-to-work into law in February, and it was set to take effect August 28.

However, that was before activists turned in petitions from all 114 counties with enough signatures to qualify in all 8 congressional districts.

“The Right to Work Ripoff will now be on Missouri’s 2018 Ballot,” said Dave Meinell, President of the Missouri Alliance and one of the marchers. “We still have work to do to remove this legislative stain from our state, but at least we know for sure the law won’t take effect next week.”

“Seniors know that when you are compensated more fairly during your working years, you improve your retirement security,” he added. “They have enthusiastically supported this campaign.”

The Missouri Alliance and other activists have been working on the petition drive and ballot initiative campaign for more than a year. Their efforts – sometimes in pouring rain – led to thousands of petition signatures from citizens in at least 15 cities.

It will now be up to voters to decide in 2018 whether to scrap the law or keep it in place.

If the right-to-work law is implemented, Missouri’s workers would be allowed to opt out of paying for collective bargaining, weakening their voice in the workplace. Right-to-work legislation has created lower wages for both union and non-union jobs and lower pension payments
in the states that have adopted these laws, in addition to other harmful effects.

Legal scholar Richard Kahlenberg characterized right-to-work in Michigan as a misnomer, saying that its real intention is to reduce union power by allowing workers the right to be free riders – “to benefit from collective bargaining without paying for it.”

National Alliance President Robert Roach, Jr. criticized the legislation and right-to-work in general as “disrupting retirement before it even begins. The Alliance stands with our union brothers and sisters to ensure that the ill effects of right-to-work do not extend beyond its current borders.”