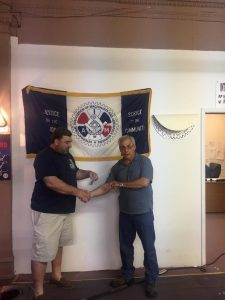 After attending the PA State Council of Machinists Meeting, LL 847 Executive Board members decided to bring the issue of healthcare to their members back home. They embarked on a campaign to demand fair and affordable healthcare legislation.

The house passed a horrible healthcare bill earlier this year. Knowing the Senate was developing its own healthcare legislation, members of LL 847 want Senators Casey and Toomey to hear their demand. The postcard  campaign called for support of legislation that provided affordable premiums, didn’t discriminate for age, gender or pre-existing conditions, included dependent coverage through age 26 and excluded the Cadillac Tax. Stan Chilipala, Trustee and 40-year member, is supporting this campaign because, “I want an Affordable Care Act to benefit working middle class people.”

This member-driven political action is timed perfectly, as the Senate is posed to vote on their version of the healthcare bill before the July 4th break. The Senate version, hoped to be a more fair than the House version, is equally devastating. It’s estimated that millions of people will lose their coverage and premiums for many others will drastically increase. This isn’t fair coverage for working people.

IAM members can help keep this from passing by calling their senators and demanding opposition to this legislation.