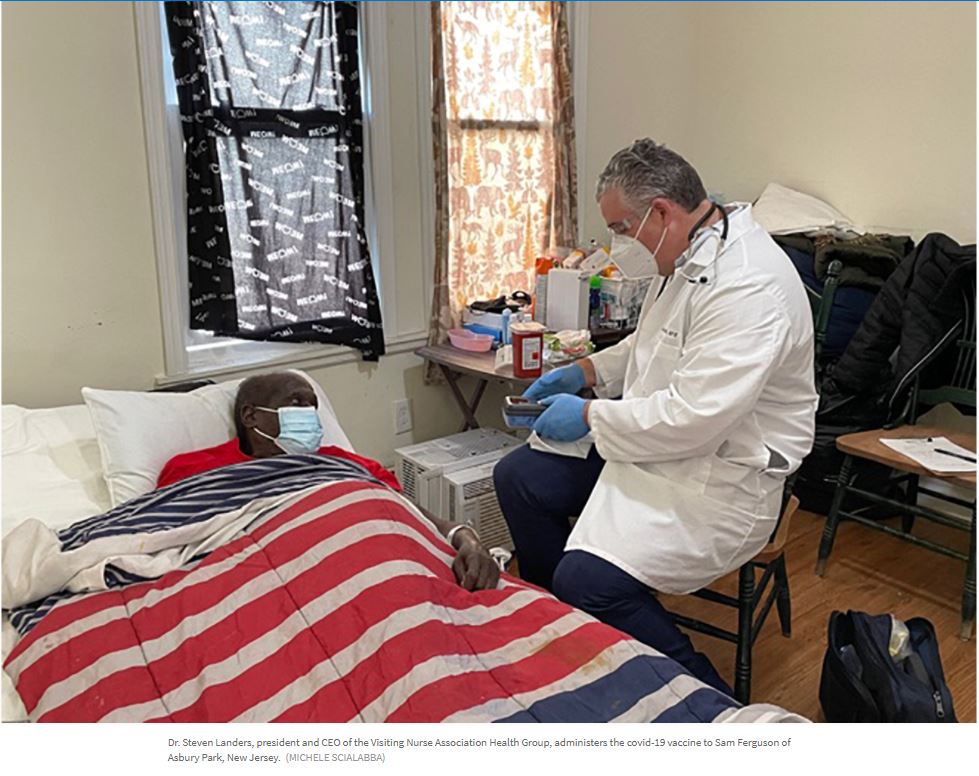 Opening another front in the nation’s response to the pandemic, medical centers and other health organizations have begun sending doctors and nurses to apartment buildings and private homes to vaccinate homebound seniors.

In Miami Beach, Florida, fire department paramedics are delivering vaccines to frail seniors in their own homes. In East St. Louis, Illinois, a visiting nurse service is offering at-home vaccines to low-income, sick older adults who receive food from Meals on Wheels.

In central and northern Pennsylvania, Geisinger Health, a large health system, has identified 500 older homebound adults and is bringing vaccines to them. Nationally, the Department of Veterans Affairs has provided more than 11,000 vaccines to veterans who receive primary medical care at home.

These efforts and others like them recognize a compelling need: Between 2 million and 4.4 million older adults are homebound. Most are in their 80s and have multiple medical conditions, such as heart failure, cancer, and chronic lung disease, and many are cognitively impaired. They cannot leave their homes or can do so only with considerable difficulty.

By virtue of their age and medical status, these seniors are at extremely high risk of becoming seriously ill and dying if they get covid-19. Yet, unlike similarly frail nursing home patients, they haven’t been recognized as a priority group for vaccines, and the Centers for Disease Control and Prevention only recently offered guidance on serving them
.

“This is a hidden group that’s going to be overlooked if we don’t step up efforts to reach them,” said Dr. Steven Landers, president and CEO of Visiting Nurse Association Health Group, which provides home health and hospice care to over 10,000 people in New Jersey, northeastern Ohio and southeastern Florida. His organization plans to launch a pilot home vaccination program for frail patients this week.

Jane Gerechoff, 91, of Ocean Township, New Jersey, is waiting for the group to vaccinate her. She had a stroke more than a year ago and has difficulty breathing because of a serious lung disease. “I can’t walk; I’m in a wheelchair. There’s no way in the world I could get the vaccine if they didn’t come out to me,” she said in a phone interview.

Although Gerechoff doesn’t go out, she lives with an adult son who interacts with people outside the house and she receives help from physical and occupational therapists at home. Any one of them could bring in the virus.

Reaching homebound seniors presents many challenges. At the top of the list: Home care agencies and hospice organizations don’t have access to covid vaccines either for their staff or patients.

“There is no distribution of vaccines to our members, and there has been no planning surrounding meeting the needs of the people we serve,” said William Dombi, president of the National Association for Home Care & Hospice.

Organizations that administer vaccines also complain they’re not being paid enough by Medicare to cover their costs — primarily staff time and effort. (The shots are free because the federal government is paying for them.) Making a vaccine house call requires about an hour on average, including travel, time interacting with patients and post-vaccination monitoring of people for potential side effects, according to program leaders.

Medicare reimbursement for the first shot is $16.94; for a second shot, it’s $28.39, according to Shawna Ramey, a consultant who presented the data at a recent American Academy of Home Care Medicine webinar. “The actual cost of these visits is closer to $150 or $160,” Dombi said.

Then, there are issues with cold storage and transportation for the Pfizer-BioNTech and Moderna vaccines. Both vaccines are fragile after being thawed and need to be handled carefully, according to the new CDC guidance on vaccinating homebound adults.. Once vaccine vials are opened, shots need to be delivered within six hours, according to instructions from Pfizer and Moderna.

Those requirements have proved too burdensome for Prospero Health, which serves 9,000 seriously ill patients in their homes in 20 states, including nearly 2,000 homebound patients. Fewer than 10% have been vaccinated, said Dr. Dave Moen, Prospero’s medical group president.

Things will become easier if vaccines from Johnson & Johnson and AstraZeneca receive approval, as expected, he suggested. Both of those vaccine candidates are more stable than the Pfizer and Moderna vaccines and would be easier to administer in the home, Moen said.

Palmer Kloster, 84, of Bradley, Illinois, receives care from Prospero under a contract with his Medicare Advantage insurer, UnitedHealthcare. He’s a largely immobile polio survivor who has undergone open-heart surgery and receives care from paid helpers for four hours a day.

“I really need someone to come here and give me a shot,” he told me in a phone conversation. “I don’t want that disease [covid-19]. At my age, it would be very detrimental.”

In Boston, Mary Gareffa, 84, is grateful that a physician she knows and trusts, Dr. Won Lee, came to her house in early February to vaccinate her. “I haven’t been out of the house in about eight years, except by ambulance,” said Gareffa, who has stomach cancer, weighs 73 pounds and broke her hip this summer after a bad fall.

It’s essential to reach out to patients like Gareffa, said Lee, a geriatrician who works with the Boston Medical Center’s home-based program. “It’s worth providing quality of life and reducing suffering, and covid-19 causes nothing but suffering,” she said. The Boston program has vaccinated 84 people as of Feb. 12.

The vaccines come from the medical center’s supply. Before going out, staff members call patients and address any concerns they might have about getting the shots. Most are African American and many families want to know whether the vaccine will make their frail parents or grandparents sick. “They need to hear that it’s safe to get a shot from someone who knows their medical issues,” Lee said.

Wake Forest’s house call program is sending out a doctor, nurse or physician assistant paired with a pharmacy resident to deliver vaccines. About 200 people are served through the program, most of them in their late 70s or early 80s with five or more medical conditions, said Dr. Mia Yang, the program’s director.

Wake Forest’s goal is to provide vaccine house calls to up to 40 patients a week and include family caregivers if there’s adequate supply, Yang said.

Robert Pursel, 69, who has severe osteoporosis and fluid retention in his feet and legs, and his wife Gail, 72, who has serious back problems, both received Pfizer vaccines in late January from Geisinger at their home in Millville, Pennsylvania. At first, Robert said he was skeptical, but now he’s glad he said yes. If a Geisinger nurse hadn’t come to them, he wouldn’t have been able to get out on his own.

Because of his swelling, “I can’t get my shoes on,” Robert said, and “I’d have to walk barefoot through the snow and ice out there.”

Kaiser Health News
(KHN) is a national health policy news service. It is an editorially independent program of the Henry J. Kaiser Family Foundation
which is not affiliated with Kaiser Permanente.