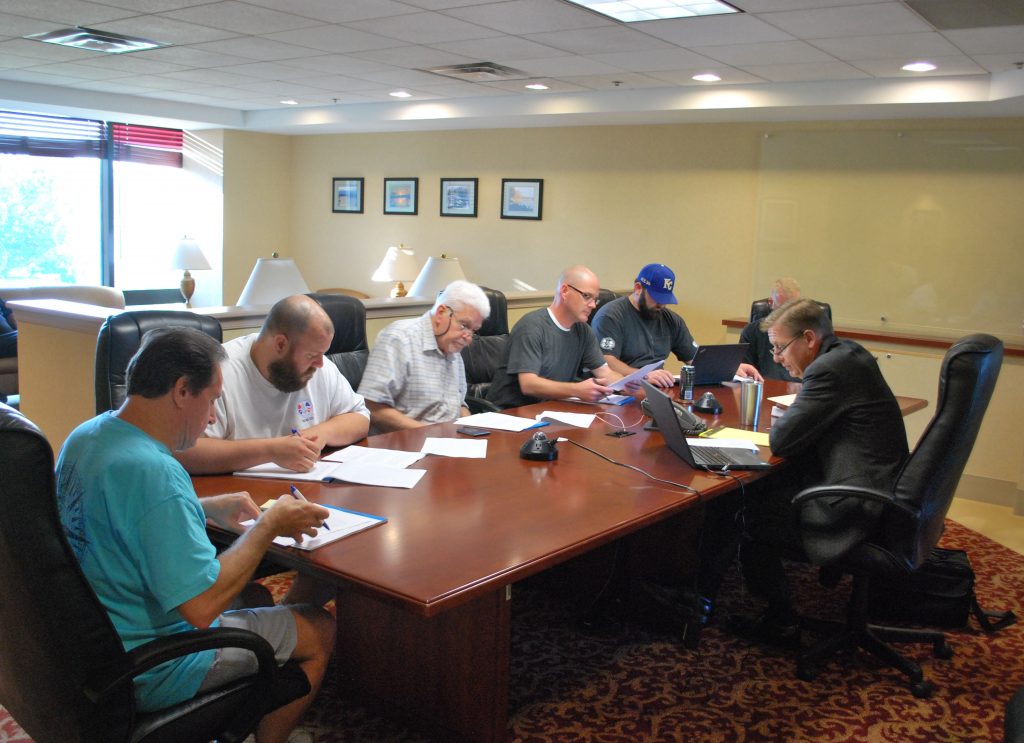 Members of the IAM Local 176 Bargaining Committee take part in a bargaining simulation with William W. Winpisinger (WWW) Director Chris Wagoner, right, playing the role of the company. The exercise – the highlight of WWW’s Negotiation Preparation for Bargaining Committees Program – is designed to give bargaining committees a realistic taste of the frequently-intense atmosphere at the bargaining table.

Members of the Kansas City IAM Local 176 Bargaining Committee were among the latest groups to complete the Negotiation Preparation for Bargaining Committees Program at the William W. Winpisinger (WWW) Education and Technology Center in Hollywood, MD.

The group spent a week learning, planning and developing a strategic, constructive and unified approach to their upcoming negotiations with Harley-Davidson in 2018.

“Knowledge is power, and the IAM is committed to making sure Negotiating Committees are prepared to bargain for the best contract possible for our members,” said IAM Collective Bargaining Director Craig Norman. “Negotiation Preparation Training held at the Winpisinger Center is more than just a ‘class’. The training allows for class structure on costing the contract and time for the Negotiating Committee to focus on their bargaining strategy. As important as the actual negotiation sessions are, the months preceding negotiations are critical for building a powerful voice within the membership.”

“Having the opportunity to work with WWW educators and departmental staff from the Grand Lodge and Midwest Territory in planning and strategizing the best ways to ensure Local 176 members at Harley-Davidson the best contract is a huge benefit to the membership,” said IAM Local 778/176 Directing Business Representative Joe Capra. “The Bargaining Committee worked hard day and night at the Winpisinger Center to learn the skills and tools needed for a successful negotiation. We look forward to bargaining on behalf of the membership as we continue preparations over the next few months.”

As part of the program’s customized training modules, the Bargaining Committee worked together to produce tools and plans specific to their members and upcoming negotiation. Training topics included how to draft contract language, present proposals, analyze the company’s strengths and weaknesses, mobilize and communicate with members – plus more.

The week culminated in a bargaining simulation – the highlight of the program – designed to give the committee a realistic taste of the frequently-intense atmosphere at the bargaining table.

The special training months ahead of negotiations is especially important as the IAM, in a joint statement with the United Steelworkers (USW), recently announced its decision to withdraw from a two-decades old partnership agreement with the motorcycle-maker.

IAM Local 176, the first group scheduled at the bargaining table, is composed of approximately 425 members. Their contract, which expires July 31, 2018, is coordinated bargaining with the IAM and USW.