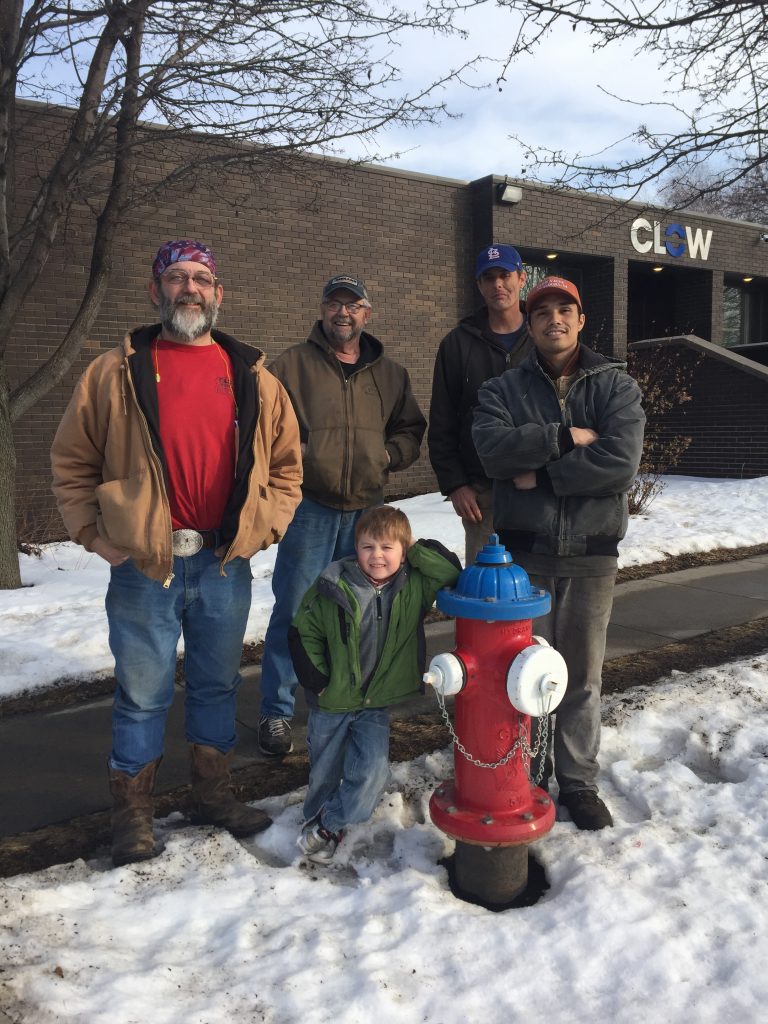 IAM Local 1498 adopted 27 fire hydrants throughout the city of Oskaloosa, Iowa, as part of the IAM Midwest Territory’s “IAM H.E.L.P.S. in the Community” program. As part of the adoption, the Local is responsible for clearing the fire hydrants of snow during the winter months. Pictured left to right, IAM Local 1498 members Jeff Elliot, Dean Hubbard, Ken Farmer, Storm Cristobal, and Evan Farmer, Ken Farmer’s son.

Members of IAM Local 1498 in Oskaloosa, Iowa are making it easier for their local fire department to keep their community and neighbors safe in a fire emergency.

The Local, which makes fire hydrants for Clow Valve Company, adopted 27 fire hydrants throughout the city, as part of the IAM Midwest Territory’s “IAM H.E.L.P.S. in the Community” program. IAM H.E.L.P.S. stands for Honoring, Engaging, Lifting, Providing and Servicing. The initiative supports the Territory’s continued efforts to provide essential support to the communities in which we live.

As part of the adoption, the Local is responsible for clearing the fire hydrants of snow during the winter months.

“When firefighters are called to a fire emergency, every second counts,” said IAM District 6 Business Representative John Herrig. “They don’t have time to clear hydrants, especially in the winter months. This is our way of giving back to the community and doing what unions do best – serve.”

To date, Local 1498 volunteers have gone out to clear fire hydrants three times, most recently this past February, when two storms pummeled the city with over two feet of snow in one week.

“We try to do things in and around what we produce,” said IAM Local 1498 member Jeff Elliott, who first pitched the idea at the Local’s monthly meeting. He, along with the help of IAM Local 1498 President Dean Scholtus and Recording-Secretary Ryan Williams, helped get the program off the ground. “If we can do things that make using our product easier and help the community, we want to do that.”

Dave Christenson of the Oskaloosa Fire Department told the local paper, the Oskaloosa News, that many of the homeowners are elderly and are unable to help keep the hydrants clear of snow. “They [union] stepped up to the plate,” said Christenson.

“IAM Local 1498 members encapsulate everything we stand for as a labor organization,” said IAM Midwest Territory General Vice President Phil Gruber. “Their ability to serve others in their community in such a non-conventional, creative way makes us proud as a labor union. We’re extremely excited about their new IAM H.E.L.P.S. in the Community service project.”