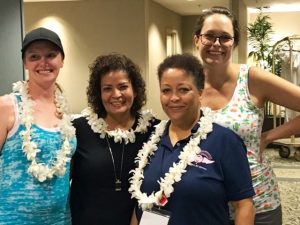 Approximately 200 Union Women from Canada and the United States attended the Institute.  They had a wide variety of workshops and speakers.  According to Sister Lillis, “the networking and support was inspiring.”  Sister Lillis served on the Local Planning Committee and accepted an invitation to do a workshop on Offensive Bargaining to Achieve a First Contract.  It was the largest attended workshop of all that were held that week.   As students, the IAM sisters were immersed in experiences such as advanced Leadership Skills, Organizing, Negotiating, Mediation, and Community Activism. They all participated in a demonstration rally to support  newly organized HERE, Local 5 members at the Modern Hotel in Waikiki struggling to achieve a first contract.

The Women’s Department and Sister Lillis would like to give a special thanks to GVP Allen who supported the Western Territory’s participation in this event; District 140, Local 764 and LL 1998 for sponsoring the Sisters Dixon, Wunderlich and Bradley-Taylor’s attendance.

Next year’s Institute will be in Sonoma, CA.  It is recommended for other IAM Women’s Committees to look at the possibility of attending and having these types of experiences!