As we close out Hispanic American Heritage Month, celebrated every year from September 15 to October 15, we honor the work of those Latinos who have influenced our labor movement and our culture: César Chávez, Dolores Huerta, Paul Montemayor, and Jack Otero, to only name a few.  They have broken the barriers that attempted to hold Latinos back. Their efforts started to carve a space for Latinos in labor and to cultivate a nationwide grassroots movement.

The IAM partners with constituency groups like Labor Council for Latin American Advancement (LCLAA) who work to educate, organize and mobilize Latinos in the labor movement and has expanded its influence to organize Latinos in an effort to impact workers’ rights and their influence in the political process. For more information about them check out their website.

Our own IAM members are continuing that brave tradition by making positive changes in their communities today. Read more about some of them below: 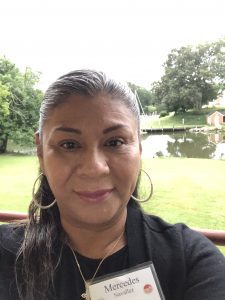 Mercedes Navallez has been a member of Local Lodge 1125 since 2018 and currently serves as a Steward for her local.  She believes in the importance of Hispanic American Heritage Month. “It is an honor to be Hispanic, to contribute a bit of our culture, thoughts, dedication to work and family.”

When Navellez reflects on the importance of those who paved a way before, she admits she “admires our ancestors, they were the ones who gave us the courage to continue fighting for our dreams and goals, they gave us all the tools to continue in daily life, they opened paths for the well-being of each individual and for our own families.”

Her hope for the members and the future of Hispanic workers throughout North America is that “We work together as a team with new work perspectives, so we can understand the needs of Hispanics. That more Hispanics are involved in hard union work, Hispanics bring with them fresh new ideas and prosperous changes.”

Navellez remarked that as a 53-year-old Hispanic woman, being a single mother with 2 daughters, “it is not easy, many doors were closed to me on my way, but thank God others were opened!” She continues the ardent work every day of work, motherhood and now being a grandmother—which, to her, “is an immense pride to say, yes it can be achieved!”

Miguel Garcia is a member of IAMAW UCPR LL 2252-C. Garcia believes National Hispanic Heritage Month is a “fair way to share the recognition of the great cultural contribution that Hispanics have made to the United States of America.”

Garcia greatly admires “Roberto Clemente Walker, who became famous in the US as a baseball player with the Pittsburgh Pirates, at a time when there were still not so many Hispanics in the sport. He was one of the best players, with 12 Gold Glove awards won. He spent a lot of time helping the poorest communities and died trying to bring humanitarian aid to another country. He was a mentor to young people even though he lived in times of racial segregation.”

Garcia hopes that other IAM members learn “That like other Hispanics have contributed to the strengthening of our culture and our rights in the US, we as a union can achieve any goal we set for ourselves in order to strengthen the bonds between unionized workers. “

His hope for the future of Hispanic/Latino workers throughout North America is that, “we have equal labor rights, medical benefits and other rights. That we are not discriminated against for any reason” and that “according to our abilities, we get jobs that we can do in a fair manner.”

Garcia remarks, “I have been working in construction for 30 years. I never imagined that I would have the opportunity to study and graduate Cum Laude in a technical career.” He also never imagined traveling to the mainland U.S. to visit the IAM’s Winpisinger Center to take courses that lead to his being chosen as a delegate and treasurer of his Local Lodge. For him, giving up was never an option. “Where there is a will, there is a way.” He hopes to be able “to continue contributing positively to the roles assigned to me in the future to inspire and help Hispanic unionists in the US.”

Elías Flamenco Rivera, a Grand Lodge Communications Representative, believes that “Hispanic Heritage Month is a time to honor all the contributions made by our community despite all obstacles.”

When talking to Flamenco Rivera about who has inspired him, he remarks, “Even though there are many individuals that I respect for being trailblazers in their respective fields as the likes of Cesar Chavez and Sonia Sotomayor, the individuals who I admire the most are my parents. They immigrated to the United States with nothing but dreams, undertaking low paying jobs then considered ‘non-essential,’ and without speaking the language, they laid out the foundation and the values for me to succeed.”

Flamenco Rivera believes that “Hispanic Heritage Month offers an opportunity to build solidarity as we look to our shared struggles and aspirations. As the labor movement, the Latino community is not monolithic, and we all have different backgrounds and experiences. These differences make us stronger as we strive for a better future.”

Flamenco Rivera arrived in the U.S. as a teenage refugee, and went on to achieve many firsts in his family: the first to graduate from college, first to become a U.S. citizen, first to be able to work in Congress, first one to have met the President of the United States, and the first to be part of a labor union. These experiences have allowed him “to understand the importance of inclusion and the need to expand opportunities for underrepresented populations,” he explained.

He believes that the IAM supports the values that lead to such achievements, not just on paper but “puts them into practice as having one of the most diverse Executive Councils in the labor movement and pushing for initiatives to advance inclusivity.” Despite the IAM paving the way for representation, Latinos are still underrepresented in leadership roles. As the U.S. Latino population grows and shapes the present and the future of the U.S. economy, that level of underrepresentation needs to change. “Having diverse representation in leadership positions not only helps to promote inclusion but helps to build bridges between communities.” 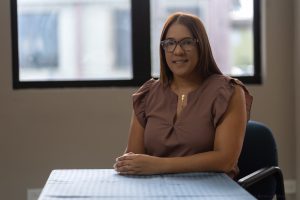 Nadry Martínez, a member of Local Lodge 2725, views Hispanic Heritage Month as a time to honor the achievements of Latinos and Hispanics in the United States, and it recognizes the cultural and labor contributions of our Latino presence in the country.

When asked who she admires and looks up to, she said she admires and feels such love and pride for her grandfather Juan Miguel Fuentes-Vizcarrondo. He came to the U.S. in the 1960s, “determined to fight and move forward outside his homeland. He braved the language barrier, studied, worked hard in multiple trades, and served in the U.S. Army.”

In the late 1960s, he had the opportunity to write a column in The Hartford Times, an evening newspaper in Connecticut, in Spanish; he decided to include photos in the column so that people could see positive images of his Puerto Rican community. Thanks to that and to his love for the Latino community, he became a photographer with a careful desire to present a complete image of his community to counteract ignorance, racism and stereotypes. Among his many contributions, he advocated and achieved respect for the Spanish language in schools with Latino populations in Hartford. “All this passion for his Puerto Rican community made him join forums and fights for addressing issues related to justice and civil rights for Hispanics,” Martínez said.

Martínez noted that “The community of people of Hispanic origin plays an important role in complementing coexistence in the US. The influence of Hispanic culture is reflected in every element of American life; in politics, in education, in sports, music, television, among others. Together we help to have a better Nation.”

When asked what she hopes to see for our Hispanic colleagues, she says, “I expect empathy, consideration, respect, and that we are treated with equal rights. We are a community with a great workforce and resiliency. We unite and work together for the well-being and growth of ourselves and our communities.”

Martínez considers herself, as a Latina, to be “strong, responsible; looking to inspire and give a good example of struggle and perseverance. I have a lot to achieve and dreams to fulfill. I like to work, I like what I do and I recognize the great work we do with our union members. Above all, I hope to have the ability and wisdom to make contributions to my peers with humility and respect.”