On July 26 Americans will mark the 27th anniversary of the signing of the Americans with Disabilities Act (ADA) by President George H.W. Bush. The ADA prohibits discrimination and works to ensure that people with disabilities have equal opportunities to live a fulfilling life.

The number of people in the United States with a disability in 2010, representing 19.0 percent of the civilian noninstitutionalized population. People with a disability have a physical or mental impairment that affects one or more major life activities, such as walking, bathing, dressing, eating, preparing meals, doing errands alone or doing housework. A disability can occur at birth or at any point in a person’s life

Click here for more information about the Americans with Disability Act 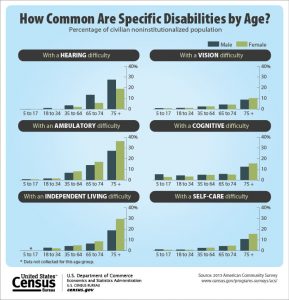 This graphic looks at the age and gender of the U.S. population reporting a disability. The Data from the American Community Survey shows that ambulatory disability, or serious difficulty walking or climbing stairs, is the most common for males and females 75 years and over. (PRNewsfoto/U.S. Census Bureau)