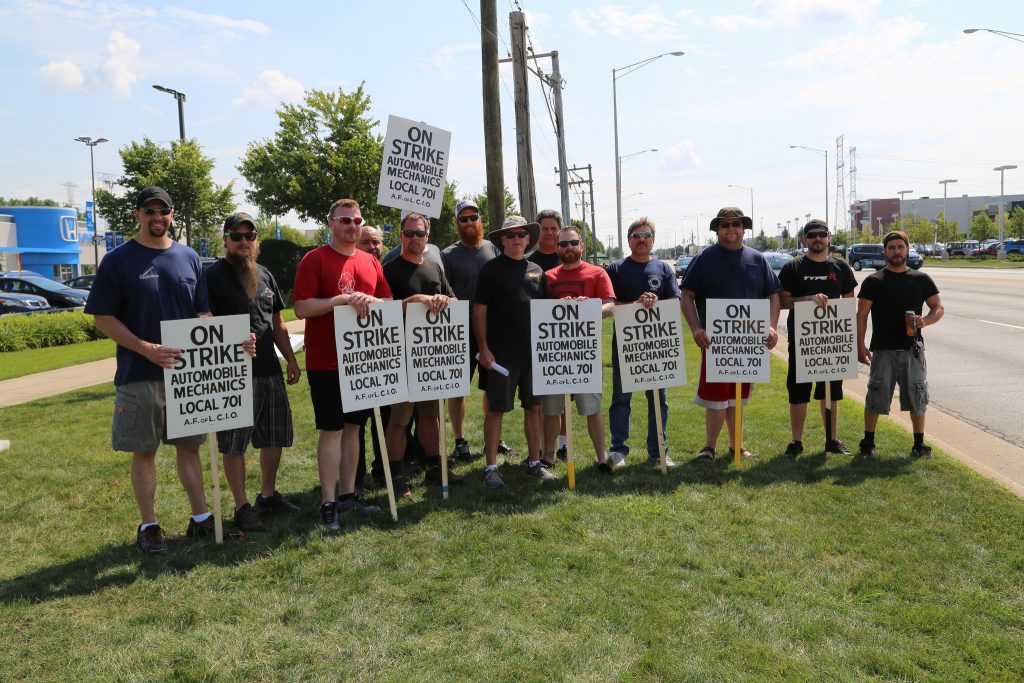 “We did it! You did it!” said Local 701 Directing Business Representative Sam Cicinelli in his opening remarks to the members. “We wrestled them down, defending each of their moves to where they finally tapped out. They waved the white flag and capitulated to our demands.”

The newly-passed offer was the fourth since the mechanics traded in their tools for strike signs in early August. The group overwhelmingly rejected three previous proposals presented by the NCDC because of the association’s consistent failure to address several key issues brought forth by the IAM.

The terms of the final agreement mirror the same offer agreed upon by more than 70 individual dealerships who, throughout the strike, broke ranks with the dealer association and, instead, settled interim agreements with the union directly.

The contract now addresses a number of the union’s key issues, including a significant wage increase across the board and the mechanics’ number one issue of increasing their base pay two additional hours over the term of the agreement.

In addition, the contract addresses the advancement of semi-skilled workers towards a career path, shortens the apprenticeship scale from 10 to 5 years, fixes a break in seniority for a longer period if workers get hurt on the job, provides a more family-friendly work schedule for senior-level Journeymen technicians, maintains the employee contribution for health insurance, and increases tool insurance to cover up to $100,000.

“We improved on each major proposal you originally asked for with the exception of one,” said Cicinelli. “Did we get it all?  No. But we made improvements and moved in the right direction, all while giving up nothing in exchange for those items. We earned them by laying down our tools and taking a stance.”

“The NCDC denied our proposals from day one,” said Cicinelli. “They tried to break this union. They attempted every dirty trick in the book by trying to demoralize you on the line. They tried to fill you with uncertainty while blaming the union for what’s going on.

“They tried to divide you. But we divided them.”

“This is what happens when we as unionized workers stick together. When we refuse to compromise our principles. When we resolve to take nothing less than what we deserve. Today you’ve shown other working Americans that we can be successful – even through the most difficult of times. When we come together, we can defeat Big Business. Your union couldn’t be more proud of you today.”

“Our members fought for justice, respect and dignity on the job and they won,” said IAM International President Bob Martinez. “This is a victory for their families and every working man and woman in the auto industry. IAM auto mechanics have shown working people around the world what unity looks like. I am so appreciative of Sam Cicinelli and the Local 701 staff.”

“Thank you for all the community support we received from residents and other labor union members throughout Chicago and the entire country,” said Cicinelli, “from the monetary donations to our health care fund to all those who dropped off food, water and words of encouragement to each of our strike lines. A special thank you to IAM Grand Lodge Representative Rick Mickschl who, on behalf of the IAM Midwest Territory, baked over 300 dozen cookies and delivered them personally to members throughout the strike.”

Local 701 of the International Association of Machinists and Aerospace Workers (IAM) is the largest mechanics union in the United States, representing more than 6,000 highly-skilled craftsmen in the automotive industry. For more information, visit their website at www.mech701.org.