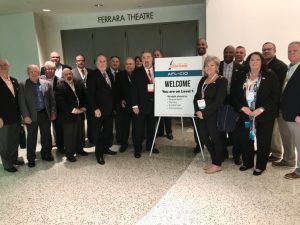 The 2017 AFL-CIO Convention wrapped up yesterday, and with it the adoption of a number of resolutions meant to guide the organization – and the labor movement – as it continues to fight for working families. Click HERE to see all the resolutions passed.

Some of the highlights:

Resolution #1 – A Worker’s Bill of Rights

In what was perhaps the most important resolution (hence the #1 billing), convention delegates adopted a Workers’ Bill of Rights which outlines the basic principles of what work should look like in America. Those include the right to a good paying job, healthcare, safety, paid leave, and retirement security, among others.

Since taking office, President Trump and Republicans in Congress have moved to repeal, rescind, or block multiple safety rules from going into effect – and they’re just getting started. Employer reporting requirements as well as silica and beryllium standards have been delayed or canceled by the Trump Administration. This resolution states that working people have a right to a safe working environment, and sets out a series of principles including opposing “regulatory reform” that would make it either difficult or impossible for federal agencies to protect workers and the public.

Resolution #24 – Fighting Together for Workers in Manufacturing

One of President Trump’s biggest departure from the traditional Republican orthodoxy was his pledge to tear up bad trade deals and renegotiate NAFTA. Unfortunately, like many of his campaign promises, this Administration has done little thus far to ensure American workers get a fair shake.

Over the past decade, the Department of Defense (DOD) has spend more than $200 billion of American tax dollars on foreign-made goods.

This resolution calls out those practices for what they are: sending American jobs and tax dollars overseas. The DOD should instead keep those tax dollars here by increasing Buy America thresholds to 100% for defense procurements and eliminating existing loopholes that allows the DOD to get around Buy American laws. The principle is simple: all goods purchased for US Defense procurement are manufactured in the United States.

Resolution #5 – Commission on the Future of Work and Unions

This resolution calls for the formation of a commission to analyze and design policy solutions and strategic initiatives to ensure that the labor movement keeps up with the ever-changing landscape of the American economy: “Technology is not just changing the way we work, but also what we work on. New products, like electric vehicles, will mean new supply chains and sources of production. As old products are replaced with new, we must replace old jobs with new jobs…and that the jobs are good jobs.”

One of President Trump’s most encouraging themes during his campaign was his pledge to take on Wall Street, hold them accountable, and make them pay their fair share of taxes. Since taking office, President Trump has so far failed to utter a negative word against Wall Street, while stacking his cabinet with Goldman Sachs executives, bank lender CEOs, and the like.

Update: As this blog was being written, Vice President Pence voted to break a 50-50 tie in the Senate to block a CFPB pro-consumer rule that would have banned banks from using forced arbitration clauses. As this CNN headline correctly summarizes: “Senate kills rule that made it easier to sue banks”.