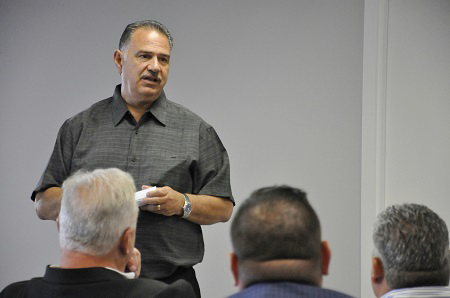 When Eastern Territory General Vice President Jimmy Conigliaro, Sr. met with his entire leadership staff in March for an organizing conference, the focus was on growing the IAM and the middle class using team effort and accountability. This week, they reassembled to evaluate progress and assess their strategies.

The conference in March featured interactive presentations on external organizing, internal organizing, education, communications, as well as a new focus regarding the influence our members can have in their respective states with lawmakers.

When the meetings concluded, everyone involved were in unanimous agreement to move forward as a team, and making a team commitment to strengthen the working class and the IAM.

“No country has ever created a strong middle or working class without strong unions,” said Conigliaro, Sr. “Without unions there is only the haves, and the have nots, period. If this country is to have a strong, viable working class again, union density is the key, and it starts right here, with the IAM, and our focus must be on growing our organization at every level, starting with the local lodges.”

So, after three months into that recommitment, the Eastern Territory brought the team leaders from the 14 states comprising the territory to revisit that commitment, and to measure where the territory stood prior to, and in the short time since making it.

Every team was given an overview of the territory’s statistics for 2016 and 2017. Just as in the initial meeting, the conclusion of the presentation was followed by an open dialogue session where the team openly asked questions, but more importantly shared their opinions.

“This was meant to be an honest look at ourselves with no finger pointing or accusations, and just as important, all comments are welcomed,” said Conigliaro, Sr. “Simply put, the beginning of an ongoing conversation.”

Conigliaro considers his role to be that as a member of the team doing whatever it takes to help the team as a whole be successful, and doing so without micro-managing.

“We’re all on the same team,” said Conigliaro. “Each of us have the same goals, we fight for working families, and to protect our own families. I want to be on the winning team, like most of us that stepped up and answered the call to serve working people.”

The post Growing the Middle Class is the Focus for Eastern Territory appeared first on IAMAW.