For nearly 50 years, the Oroville Dam has provided critical flood control, valuable hydroelectric power and essential irrigation as a key component of the California State Water Project. But in February 2017, all of that changed, and the dam quickly transformed from a powerful resource to a potential threat.

After a series of massive rainstorms tore through the state, the dam’s operators noticed significant damage to the main spillway, which is the primary channel used to prevent flooding. Due to the damage and the ongoing heavy rains, the main spillway was no longer able to drain the water from Lake Oroville quickly enough, and as a result, the dam’s emergency spillway went into operation for the first time since the dam opened in 1968. However, headward erosion of the emergency spillway meant that there was a serious possibility the dam’s concrete weir would collapse and cause massive, uncontrolled flooding in the downstream areas around the Feather River.

Emergency protocols quickly went into effect, and nearly 200,000 people were evacuated. Fortunately, the water level dropped, the weir held out, the crisis was averted and residents returned to their homes. But the damage to the dam was grave; both the main and emergency spillways require extensive repairs.

IBEW Local 1245 members have been on the scene at the dam since the very beginning, even before the water hit the emergency spillway. Initially, several crews from Pacific Gas & Electric were called in to remove the transmission towers and wires that were in the emergency spill channel. They utilized a helicopter to take down the power lines and towers and completed the work the day before the lake water entered the emergency spillway. The PG&E crews were then tasked with building a shoo-fly around the spill channel—which consisted of nine locations with 13 light duty steel poles—to restore power to that circuit.

Once the spillways were stabilized and the area was deemed safe, Local 1245 outside construction crews were brought in to help with the complex restoration work, which may take months or even years to complete. 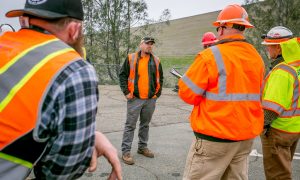 “It’s extremely challenging because there are 15 different entities, at minimum, that we have to coordinate everything with, and we have to keep everybody safe,” said General Foreman Jeff Emerson, who comes out of IBEW Local 47 in Southern California. “It’s not just us here, there’s traffic control, there’s people doing inspections on the spillway, there’s the rock haul trucks that are moving the rock, the barges that are down there sluicing out the river…there’s so many moving parts here.”

The Utility Reporter caught up with Emerson and his crew a couple weeks after the crisis. They were working east of the spillway damage, at the base of the dam itself, and Emerson detailed precisely what was going on at the time.

“At first, we had to run an emergency line on the vacant side of the existing 230 lattice structures,” he explained. “Once we got that emergency line in and energized so they could energize the powerhouse and run the hydro plant, the next step is to run a temporary shoo-fly to move all the power lines up the hill, away from the spillway and the construction, so they can de-energize those lines and work on the spillway safely.”

The crews used a helicopter and sky crane to wreck out some of the vacant towers that were being undermined by the spillway erosion. 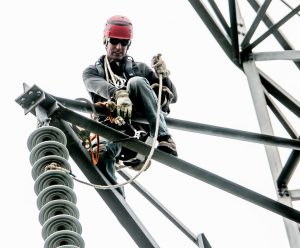 “My job today was to fly in with the helicopter and to remove insulators and travelers, because the tower is being wrecked out and everything that’s loose or could swing has to be removed so it’s just the structural steel that’s left,” said lineman Robert MacAllister, who comes out of IBEW Local 104, based in New England. “That way, when the sky crane comes, [what remains of the tower] can be rigged and lifted, and they’ll know what they’re dealing with as far as balance and load.”

Given the exceptionally steep terrain, the helicopter was a vital asset to the crews. What would have taken 45 minutes to traverse in a land vehicle took less than a minute in the chopper. 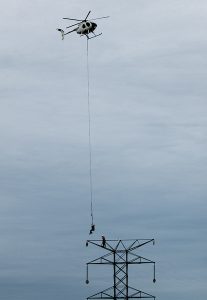 “Materials, tools and men can be put into exact positions in astounding time with the helicopter. It’s a very efficient process,” said MacAllister, who flew on the helicopter’s long line, suspended in the air and tethered in with two safety hooks attached to a harness. “It’s a very safe, very secure attachment. It’s a smooth ride, actually. Like driving a motorcycle, except you’re 500 or 1,000 feet off the ground. The wind is in your hair, you can see everything. It’s surreal and exciting.”

A Testament to the Union 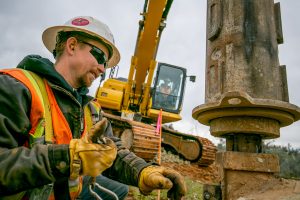 The main contractor on the scene, Abercrombie Pipeline Services, had just become signatory to Local 1245 shortly before beginning work on the project (Outback Construction also assisted with the shoo-fly by digging holes into the bedrock). A number of the IBEW members working on this job came in from other areas outside of Local 1245’s jurisdiction. Most of them had never worked together before, and few had even encountered a job quite like this one. But they all had one thing in common—as IBEW linemen, they were able to draw upon their extensive skills and training and quickly formed bonds that enabled them to maximize their effectiveness on the job.

“I’ll tell you what’s great about the union—all of the guys that we’ve got working here came out with great attitudes,” noted Emerson. “They’re all working together to figure things out, and as soon as they figure something out, they tell the next crew…that’s the brotherhood of [the IBEW] right there, everybody teaching each other and showing each other the ‘tricks’ they’ve picked up. And the learning curve—how fast they learned how to do all this stuff—it’s pretty amazing. It’s a great testament to the union.”

“I love being in the union. It’s a rewarding experience, and [linework] is the job of a lifetime,” said MacAllister. “The skills, the people you meet, the knowledge, the work ethic, it’s all there. It’s the complete package. I love being a part of it, and I want to keep doing it for years and years.”