A Future That Works for Workers

At this year’s Consumer Electronics Show, the AFL-CIO is partnering with SAG-AFTRA to host the second annual Labor Innovation & Technology Summit. The summit, led by AFL-CIO Secretary-Treasurer Liz Shuler, SAG-AFTRA President Gabrielle Carteris and UNITE HERE International President D. Taylor, brings together union, technology, entertainment and media leaders to explore how these industries intersect and the potential impact for America’s workers and for the country’s creative culture.

As the voice of working Americans, unions play a critical role in ensuring that rapidly evolving technology, which will bring so many great things to humanity, doesn’t roll over humans in the process. Recognizing that this can only be accomplished by partnering with the tech industry, the second annual Labor Innovation & Technology Summit brings together diverse voices for a frank conversation about where we are, where we’re going and the critical milestones along the way.

For the better part of four decades, workers have been more productive than ever, creating massive amounts of wealth—but rigged economic rules, unmitigated corporate greed and unrelenting political attacks have weakened our voices, stifled our wages and eroded our economic security. Yet, as we write this report, a wave of collective action is sweeping the nation. Working people across industries and demographics are joining together for a better life. This uprising comes at a critical moment, as the astounding technologies of the digital revolution have the potential to improve workers’ lives but also threaten to degrade or eliminate millions of jobs.

The AFL-CIO Commission on the Future of Work and Unions, formed by a unanimous vote of the 2017 AFL-CIO Convention, is putting working people where we belong—at the center of shaping the economy, work, unions and the AFL-CIO. 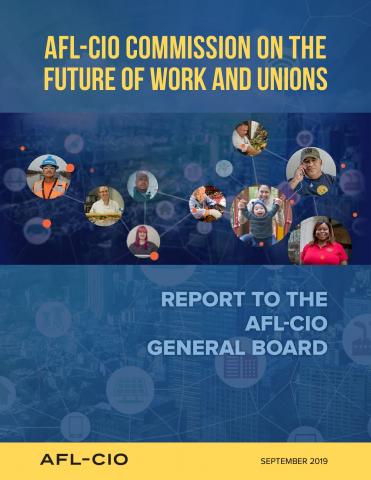 AFL-CIO Commission on the Future of Work and Unions

A report of the AFL-CIO Commission on the Future of Work and Unions, an initiative focused on bringing workers’ voices into the future of work debate and rebuilding worker bargaining power in an economy that is leaving too many people behind.

Now it’s time for industry bosses to start treating you with hard-earned dignity and respect. While you’re putting in crunch time, your bosses are ringing the opening bell on Wall Street. While you’re creating some of the most groundbreaking products of our time, they’re pocketing billions. While you’re fighting through exhaustion and putting your soul into a game, Bobby Kotick and Andrew Wilson are toasting to “their” success.

A leading figure from America’s biggest labor organization penned an open letter to game developers encouraging unionization across the games industry. AFL-CIO secretary-treasurer Liz Shuler took to Kotaku with a post that asks workers in the games industry to fight for adequate pay, sensible work hours, and against toxic work conditions.

On Feb. 15, just days after massive layoffs at Activision Blizzard, the AFL-CIO issued a powerful public statement of support to game developers in the United States. Also known as the American Federation of Labor and Congress of Industrial Organizations, the AFL-CIO represents more than 12 million workers in 50 different labor unions, including a unit here within Vox Media. Its message, published in an open letter at Kotaku, was both simple and profound.

The AFL-CIO, the nation’s largest federation of unions, has taken aim at Activision Blizzard CEO Bobby Kotick and his annual compensation in 2018 following a massive round of layoffs earlier this year which saw nearly 800 employees lose their jobs. AFL-CIO secretary-treasurer Liz Shuler, in a statement published Tuesday, highlighted Kotick’s financial compensation in 2018—which was $30.8 million, the majority of which came from stock options ($19 million)—saying, “This is like legal highway robbery.”